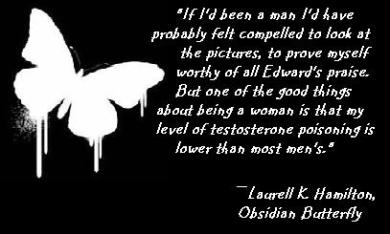 In this ninth installment of the Anita Blake Vampire Hunter series, Edward calls on Anita to fulfill a favor. Anita gets to travel New Mexico to see Edward in his home town. Edward Isn’t just asking for her help with the investigation. He is also asking her to be his conscience.

Edward introduces Anita to his real life and his backup. Anita gets to show off her knowledge and kick butt powers.Some of which get her her some wary looks from people she should be able to trust. Being called a zombie queen and witch are not the only problems Anita has to face to solve to case. A sadistic Alpha werewolf and delusional vampires is just the tip of the creepy iceberg.