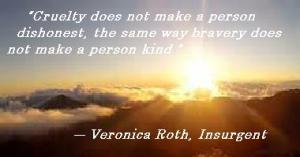 After having to kill Her friend Will and the deaths of her parents Tris struggles with grief and fear. Tris as well as her friends travel between factions and the factionless. While collecting information and saving lives Tris grows more and more reckless. Four feels Tris is to milling to risk her own life. Their relationship is made more rocky when Tris makes a choice that leads to huge betrayal. Once the mission is complete everything should go back to normal, that is until the new leader appoints herself. 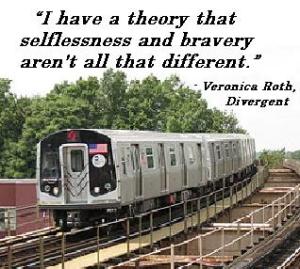 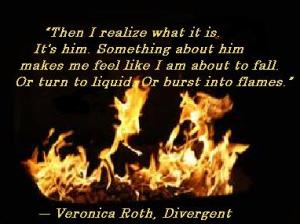 In a community far into the future where every one is divided into 5 factions, Abnegation, Amity, Candor, Dauntless, and Erudite. Tris struggles with which one to choose. After the testing her decision is made more complicated because she is one of the Divergent and can’t be categorized. Once she makes the choice she learns more about herself as well as how to protect herself. Not only can she not tell anyone that she’s divergent but it could get her killed. The Dauntless and Erudite leadership conspire to take over the government and the Divergent are the only ones left to stop them. 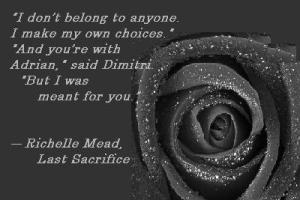 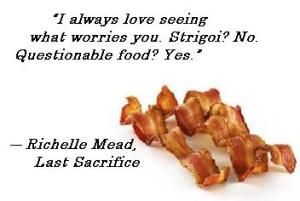 After being arrested for the murder of the Queen, Rose’s friends band together to break her out. Once her and Dimitri are on the run they head out to find answers with the help of an alchemist Sydney Sage. Once they put the pieces together they head back to court and bring their special guest with them. Court is already in an uproar over Lisa’s bid to be Queen. Now that Rose has shown up a lot of questions can be answered.

Just in time for finals a letter arrives and Dimitri is still alive. After going through the final trials Rose decides to take a few friends on a mission that may save Dimitri. Unfortunately they have to break a few laws in order to get the information that they need. By the time Rose gets the information it may be too late. While on a birthday trip Lisa and Christian are kidnapped. Rose heads out with the guardians to save them. What no one anticipates is a miracle of Lisa’s making.

On her 18th birthday Rose drops out of school in order to fulfill a promise. First on her list is a trip to Russia. Once she meets Dimitri’s family Rose finds it hard to continue on her mission. When she least expects it Dimitri finds her. Rose soon finds herself in a drugged bite induced captivity. Once Rose realizes that Lisa’s life is in danger she sets out to complete her mission. But will her heart survive the death of his heart? 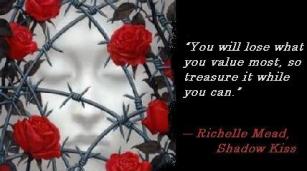 Since her last run-in with death Rose seems to have acquired a new ability. Mason’s ghost starts to show up during Rose’s field experience and causes her trouble with her teachers. After finding out about Victor Dashkov’s trial the group heads to court to testify. While on the plane Rose’s new abilities reek havoc. By the time Rose figures out that ghosts aren’t supposed to be on campus it’s to late to stop the attack. Rose and Christian fight together to save the school, but it may not be enough to save their loved ones. 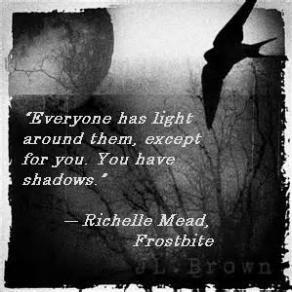 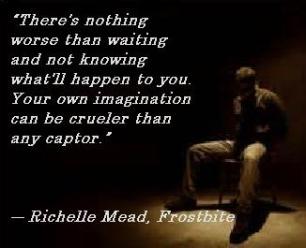 During her qualifier exam Rose finds out first hand about the death and destruction the Strigoi cause. In order to liven everyone’s spirits as well as keep them safe, the students and their families head to a nearby ski lodge. After hearing about a second attack some of the group decide to go after the Strigoi. When Rose finds out where they have gone and try to bring them back. All of them end up getting kidnapped. While struggling to stay alive Rose finds out how far she is willing to go for her friends safety.

When Rose and Lisa ran away they only knew that it wasn’t safe to stay at school. They are found and taken back to school only to have the same scary things happening all over again. This isn’t your typical High School especially since half the student body needs blood to survive. Lisa is soon kidnapped and Rose with the help of Dimitri, Christian and the Guardian’s track her down.  Even after imprisonment the kidnapper still finds a way to create  destruction. 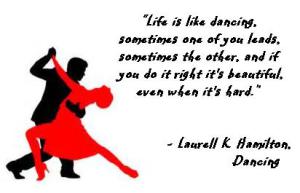 In this second ebook special of the Anita Blake Vampire Hunter series, Anita, Nathaniel, and Micah head over to Zerbrowski’s house for a family barbecue. When a few people for Nathaniel’s past shows up at the party, queue a healthy helping of awkward. Awkward turns dangerous when lies and innuendo are spread. To top it off the kids start acting as bad as the adults. In order to liven the spirit of the party Nathaniel turns to what he knows best. No… Not that! He turns to dance. 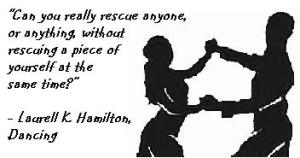 Message in Bottle By Nicholas Sparks

After a her son goes to visit his father Theresa Osborne heads to Cape Cod for a walk on the beach. It’s there that she finds a Message in a Bottle. A lovely tragedy of a man  who has lost his soul along with his love takes Theresa on a journey of of self discovery. Being a columnist she puts he skills of investigation to the test. Tracking him down was the easy part. Falling in love with him was a lot more difficult. Like the ebb and flow of the sea their relationship has it’s obstacles. Garret and Theresa are just about to find their stride and heal their old wounds when tragedy strikes again. The story comes full circle as one last bottle is sent out and a healing heart along with it.

The Witness By Nora Roberts 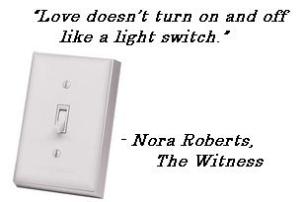 Elizabeth Fitch has been organized all her life by an over a achieving mother. Elizabeth decides to reinvent herself. Liz emerges with a new hair cut dyed black and a new wardrobe. Liz and her new friend run off to a club and get into a bit of trouble. From one tragedy to the next Liz finds herself on the run and looking for a new identity. Abigail Lowery has settled into this small town community. Soon she finds her solitude being interrupted by a nosy sheriff and his equally nosy mother. After all the years of hard work to keep herself safe she finds it hard to open up to people.  Abigail finds herself exploring this new relationship even at the risk of her own safety.

After years of abuse Erin is free. Since moving to the small town off the coast she finely able to stop looking over her shoulder. When she meets the single father who owns the local grocery the reborn Katie finds it hard to trust. With the help of her new friend Jo she begins to explore her feelings. Trouble is on the horizon in the form of her detective husband. Will Eric run again or will Katie stay and live the life she always wanted? 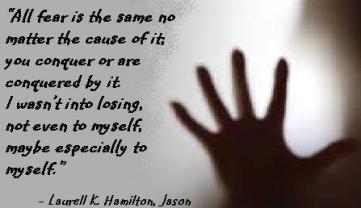 In this twenty-second installment of the Anita Blake Vampire Hunter series, Anita, Micah, and Nathaniel travel to Micah’s hometown. Because word come to then that Micah’s dad is in the hospital and the decay like infection is spreading. Anita uses all her powers to help and some of that involves a sniper rifle. Anita and Nathaniel get to meet the family and not all of the members are happy to see them. It’s a good thing they have more in common then they think they do. Secrets come out and old wounds are healed.

In this second ebook special of the Anita Blake Vampire Hunter series, Anita, Nathaniel, and Micah head over to Zerbrowski’s house for a family barbecue. When a few people for Nathaniel’s past shows up at the party, queue a healthy helping of awkward. Awkward turns dangerous when lies and innuendo are spread. To top it off the kids start acting as bad as the adults. In order to liven the spirit of the party Nathaniel turns to what he knows best. No… Not that! He turns to dance.

In this twenty-first installment of the Anita Blake Vampire Hunter series, Anita finds out what happens when vampire politics meets human activists. When this  new group of vampire rights activists start to create havoc on a legal level the “Executioner” is sent in to solve the crime and clean up the mess. Anita and Larry’s friendship hits the skids when Larry insists that Anita is to much of a monster. The new detective on the squad lets Anita know of a threat to her loved ones. Anita has only one thing in the way of getting them to safety. A Dead Man Switch. 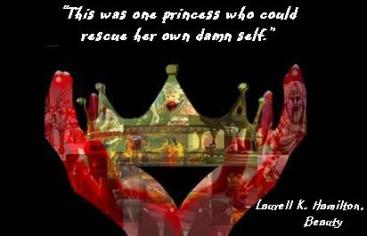 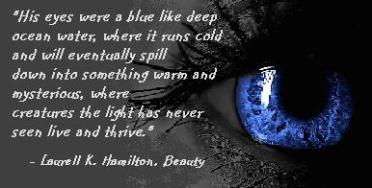 believe these beautiful men love her just the way she is. Insecurities, sarcasm, sinicism, weapons and all. 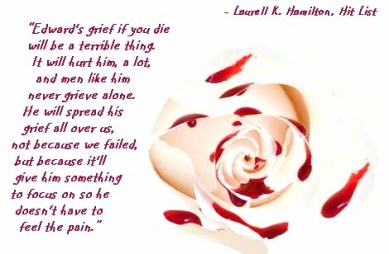 In this twentieth installment of the Anita Blake Vampire Hunter series, Anita’s work take her and Edward traveling the states in order to solve a case involving slaughtered weretigers. Things get a little hairy when Anita’s powers go haywire whenever she’s around the local weretiger clan. After Anita makes a new friend or two the Mother Of All Darkness finally makes her move. It looks like mommy dearest has picked on the wrong people when heads start to roll. Looks like Anita gets to find out what happens when a rock meets a head case. 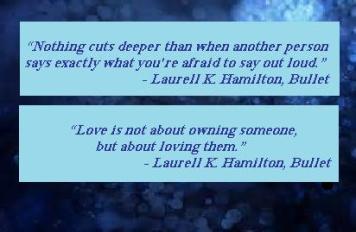 In this nineteenth installment of the Anita Blake Vampire Hunter series, Finding out that Anita, Richard and Jean-Claude have a price on their head and that someone is out to kill them isn’t quite new to them. With all the power attacks going on from not just one person but many, the men in Anita’s life start to act like children. You would think they might pick a safer time to make people bleed. When Anita’s own blood is spilled she has to decide if she is a lover or a fighter. You might be surprised like I was. 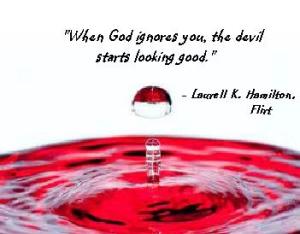 In this eighteenth installment of the Anita Blake Vampire Hunter series, Anita gets kidnapped by a client who didn’t like the answer they got. Anita has to overextend her powers and do the worst possible thing she has ever done in order to stay alive. While injured not only does she have to protect herself from the enemy but from herself as well. What usually happens when Anita is forced to defend herself? Bodies start hitting the floor and the Calvary arrives just in time to clean up the mess.